The flag of Ecuador, which consists of horizontal bands of yellow, blue and red, was adopted on September 26, 1860. It is very similar to that of Colombia and Venezuela, which are also former constituent territories of Gran Colombia. All three are based on a proposal by Ecuadorian General Francisco de Miranda, which was adopted by Venezuela in 1811 and later Gran Colombia with some modifications.
Miranda ascribed the colours he chose for his flag to Johann Wolfgang von Goethe 's theory of primary colours. In a letter written to Count Simon Romanovich Woronzoff in 1792, Miranda described a late-night conversation which he had with Goethe at a party in Weimar during the winter of 1785.

Read more
Fascinated with Miranda's account of his exploits in the US Revolutionary War and his travels throughout the Americas and Europe, Goethe told him that, "Your destiny is to create in your land a place where primary colours are not distorted.” The colors of the modern Ecuadorian flag have the following meanings: Yellow: The country's gold and agricultural wealth, Blue: The ocean, and the clear and clean Ecuadorian skies, Red: The blood spilled by the heroes who died in the name of their countrymen's Fatherland and Freedom. Coat of arms:In the background of the oval shield is the mount Chimborazo, while the river originating from its base represents the Guayas. The ship on the river is named Guayas as well. On top a golden sun surrounded by the astrological signs for Aries, Taurus, Gemini and Cancer representing the months March to July to symbolize the duration of the March Revolution of 1845. The condor on top of the shield stretches his wings to symbolize power, greatness and strength of Ecuador. The shield is flanked by four flags of Ecuador The laurel on the left represents the victories of the republic.The palm leaf on the right side is a symbol of the martyrs of the fight for independence and liberty. The Fasces below the shield represents the republican dignity. 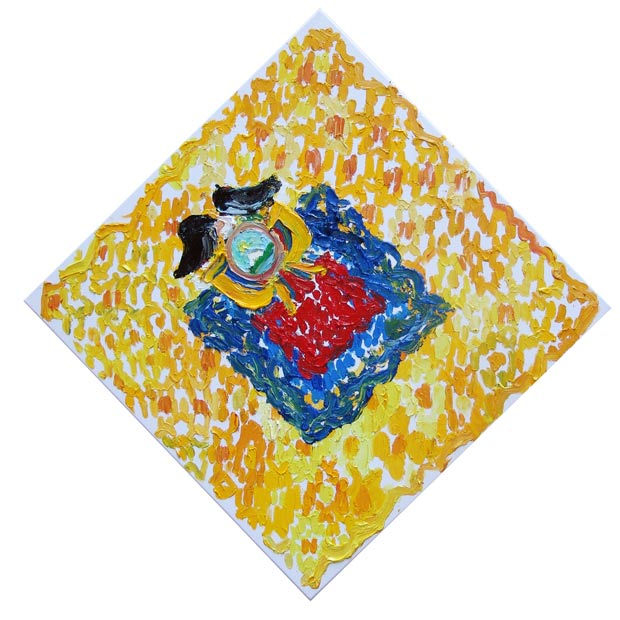